In this new chapter (and the new category) of my blog I would like to tell a story about something that occupies me for two years now. The idea was born soon after I moved to Dublin in December 2014. I did not think about it before, but it obviously got a chance to show up after I was surrounded by the new experiences and things to consider. Even though I started to write my first novel when I was only 13 years old, that attempt never got its end – now I even count seven of them! That wish – to write my first novel – was a seed that I never let to blossom, because I cut its buds off each time they showed up: for seven times. That even meant deleting the material made of 80 pages (the third attempt). Why was it so?

For me, writing a poetry was always something that clearly had its beginning and its end but, in the case of prose, it was completely different: I am never truly satisfied with the result. That means that I am always in thought that I will need to come back to the written material and check it out or, most frequently, to repair it. There is always an idea hanging above it saying that there is something missing to make it a whole, to make it perfect. All that was an endless process until this did not happen – the notebook I was quite often carrying in my bag then became a haven for something much more profound.

Did you know that Gustave Flaubert was writing “Madame Bovary” for five years, coming back to the chapters every day, all to reach the perfection? Or that “Le père Goriot” was written in only forty days, whose author, Honoré de Balzac, locked himself in the room, sleeping and eating tightly, until the moment the book was finished? The are no rules, no boundaries, for a writer to finish his novel.

Going around the city, the idea came to me: to sit down and to write down what the eyes saw and what the thoughts came. What a wonderful feeling would come to me writing it! Could it be better – to stop, to slow down, have a coffee and a cake, to hear how the river of thoughts flows?

They were my observations, the perceiving of the surroundings, my hope and even the criticism, that made over 150 pages now. What is the best part of it – it does not stop!

I would take a seat at my working table too, even though it is way too pleasurable to be outside, surrounded by people – one look left or right, the unexpectedness of the situations, can inspire me. 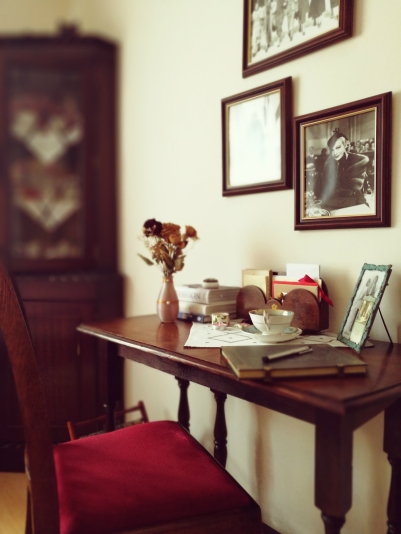 I always wondered how can it be that I never stopped writing it. The ideas are coming in the intervals that are growing bigger. For that reason I thought: “Maybe this is my first novel instead.”

Interview ǀ The story of a writer

The love for baking

Thank you for stopping by! Do not hesitate to contact me either visiting one of my social profiles or sending me an e-mail to: glorialamarr@gmail.com